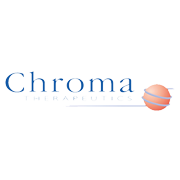 Oxford – Chroma Therapeutics Limited, a leading European specialist cancer research company, announced today positive data from a Phase II study with its oral, once-daily experimental cancer therapy tosedostat (CHR-2797) in the treatment of patients with acute myeloid leukemia (AML) and myelodysplastic syndromes (MDS) who have failed on, or who are unsuitable for, chemotherapy.

Headline data from the study, which was presented at the December 2008 American Society of Hematology (ASH) meeting, were as follows:

Chroma is currently preparing for a registration study with tosedostat in AML, to commence during 2009.

Ian Nicholson, Chief Executive Officer of Chroma, commented: “We are very pleased that this Phase II study, in patients with a poor prognosis, has confirmed the activity we saw in earlier studies. We look forward to accelerating tosedostat into Phase III registration studies during 2009, particularly in light of the lack of treatment options currently available for patients with this debilitating disease”.

The full abstract presented at the ASH meeting is available at the company’s website, www.chromatherapeutics.com.

About aminopeptidases and tosedostat (CHR-2797)

Chroma Therapeutics, based in Oxford (UK), is a drug discovery and development company focused in the fields of oncology and inflammatory disorders. Chroma is building a broad pipeline of first- or best-in-class treatments utilising its expertise in chromatin biology and its novel intracellular accumulation technologies, which include the ability to selectively target drugs to macrophages. Chroma is backed by a number of leading specialist investors, including Abingworth, Essex Woodlands, Gilde Healthcare Partners, Nomura Phase4 and The Wellcome Trust.

More information about Chroma can be found at www.chromatherapeutics.com