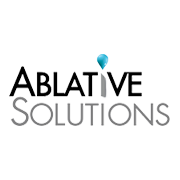 SAN JOSE, Calif. and PARIS – Ablative Solutions, Inc., a company pioneering new approaches for the treatment of hypertension, today announced 12-month results from the Peregrine Post-Market Clinical Trial, which were presented today during a symposium at the 2019 European Society of Cardiology (ESC) Congress in Paris.

The Peregrine Post-Market Study is a European multicenter open-label trial that evaluated additional safety and performance of the CE-marked Peregrine SystemTM Infusion Catheter using a neurolytic agent (dehydrated alcohol) delivered into the space outside of the renal (kidney) arteries in 45 patients with systemic hypertension. Patients included in the study were taking at least three anti-hypertensive medications.

“The results from this feasibility trial are highly promising, showing that the safe and effective reduction in blood pressure by means of alcohol-mediated renal denervation that was seen at one, three, and six months was sustained at 12 months in patients with poorly controlled blood pressure,” said Prof. Felix Mahfoud, Saarland University Hospital, Germany. “We look forward to further studying the investigational product in the randomized, sham-controlled TARGET BP clinical program.”

“The 12-month safety and performance in the Post Market study provides preliminary evidence that the renal denervation procedure using the Peregrine Catheter and alcohol as a neurolytic agent may be safe and effective for lowering blood pressure in patients with poorly controlled hypertension on medications,” said Prof. Horst Sievert, CardioVascular Center in Frankfurt, Germany. “Alcohol-mediated renal denervation with the Peregrine System may be a compelling way to treat hypertension.”

“We are pleased by these promising results, which reaffirm the promise of the Ablative Solutions approach to blood pressure reduction. We are committed to robust clinical research to further substantiate the procedural, clinical, and health-economic benefits of the Peregrine Catheter for the treatment of hypertension,” said Kate Rumrill, President and CEO of Ablative Solutions. “Worldwide, hypertension affects more than one billion people.i We remain committed to investigating and collecting further evidence to bring novel therapeutic options to the large population suffering from uncontrolled hypertension.”